Malcolm first came to Jimmy’s when he moved into the 451 controlled drinking project after being released from prison, having served time for being drunk and disorderly in his hometown. He had tried to live with his son in Cambridge for a short while, but they both had issues with drink and things didn’t work out.

At first glance, Malcolm seemed to be very quiet and reserved and fitted in well at the project.  As the days went on, though, he began to show his anxiety more and more. It became clearer that he was quite a troubled, worried man who needed intensive work.

Malcom had historic substance issues – mainly alcohol related – and had been in prison on several occasions for drink related offences. However, he made a choice to stop drinking in the project. This lasted six months during which time, interestingly, it became apparent Malcolm had few social skills and found it very hard to function whilst free from alcohol.

With encouragement, Malcolm began to do small jobs around the project, painting the garden fences and cleaning up as well as re-establishing contact with his family; but after six months, he relapsed, and things began to become more challenging for him.  His newfound associates were drug users and Malcolm too began using Class A drugs on top of his drinking

With intensive work and support Malcolm began to work with the housing team as part of a plan to get him into a Jimmy’s next-step house, with the ultimate aim of securing his own tenancy.

At first, he was very keen to engage, being given basic skills sessions by the housing team which he participated in happily and willingly. We discussed with him where he would be moving to, how he would be expected to manage and behave, and he appeared to be looking forward to moving.

When the day came, Malcolm was drunk and angry at the thought of moving – he said he wouldn’t go and would rather be “on the streets”.  But after persuasion and gentle talking from the housing team he agreed to make the move into one of our houses.

Malcolm had complex needs and a challenging history which left him often angry and open to financial abuse. He was despondent and even left without food on many occasions. After much perseverance and support, however, he was finally offered his own property in a small town 15 miles away. He was initially unsure but having seen it, seemed very happy. Sadly, again, his drink and drug use escalated before the move, and he became angry, argumentative, and demanding, saying he would not go.

With sensitivity and support, it was made clear to Malcolm that this opportunity would be a new start, a new life and a new way to get back on track and be the person he could be. He realised this was the chance he needed to break away from the increasingly downward spiral he was in, and he moved to the property. His excitement at furnishing the flat, having his own front door key and realising he could live alone after so many years of heartache and difficulty, was just wonderful to see.

It is still early days for Malcolm, and we are all aware that things may well be challenging for him in the future; but as he proudly showed us his full fridge and freezer, the polished tables, the made bed and the neat kitchen, it was clear that this was an amazing start for someone who had in the past, at times, honestly felt he had little to live for.

The support work with Malcolm, as with all the residents who move on, will continue for a few months, and even after that, we will be there if he needs help.  This is what we do. 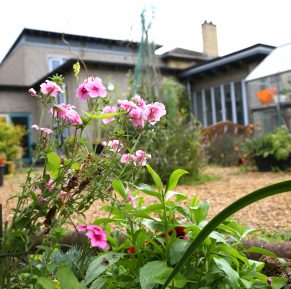