The story of ex-resident Paul Longhurst

Paul was very much a larger than life character, he was very tall and staff were always afraid he would hit his head on the ceiling as he came down the stairs to enter the night shelter (as it was then) but he never did. We have no idea how he actually managed to fit in the bunk beds when Jimmy’s had the small dorms back in the day, but he did.

He originally came from a small Scottish island that he claimed was very much like the island in the Wicker Man. He then became an RAF pilot. We don’t really know how he managed to find himself homeless in Cambridge but we do know he knew every charitable institution in Cambridge including a monastery that we had never heard of and he always knew where to find a hot meal. He was also the only person known to be able to slice a loaf of bread perfectly using a butter/eating knife. He was a kind individual. He always like to draw too, often landscapes from his childhood.

Paul sadly passed away in 2010 and one of our rooms in Jimmy’s is called the ‘Longhurst Room’. 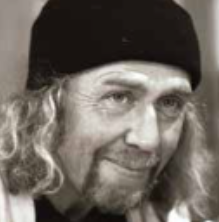