Of course there are people who care! – A volunteer blog

Back in March, it was really hard to tell how the pandemic would have played out, and in some respects it still is. Back then, we shared a feeling of worry and a sense that we couldn’t do very much as individuals to help those around us and ourselves. Helping is something that can take many forms and looking back I am mostly thankful to friends for the emotional support we gave each other in those days. Those conversations often tended towards the big question: “What can we do?”

During a period of time when in order to help others we were recommended to stay home, not having a place to go it is an even bigger problem than it is in other circumstances. An even more complex problem. The risks to one’s health and other worries aren’t even the greater issues in sleeping rough during a pandemic. As the general population gets frightened, interactions become more rare, and chains of support thin up. The perpetual struggle of accessing anything intensifies. With some of those people, who would usually step up for others, having to shield or isolating, the already scarce support reduces further. People who are homeless, for whichever of the million reasons that can lead to that, were the ones who would have paid the highest price during this health crisis.

A couple of days before lockdown started, I was cycling home with this on my mind. The streets felt already very empty and gloomy. It is always so windy in Cambridge! I had lived around here a few months and still did not get used to it. A woman was sitting in front of Emmanuel College alone. She was attempting to cover herself from the wind with a scarf, without losing the advantage of an exposed position to passers-by. I stopped and approached her. She didn’t speak English, at least not to me then. I didn’t know exactly what to do. All I had was this tenner which I handed to her as she smiled back… I was, however, conscious of how insufficient and tangential my gesture would have been to her situation. Sadly, that was going to help me with my own head, more than it was any real help to her.

That’s when the police car stopped.

The officer opened the door and asked her: “Are you ok? Do you have a place to go?”

Then she addressed me: “You should not give her money! She’s begging.”

“Yes, but… in this situation!” I protested.

A young man arrived on his bicycle, one of Jimmy’s residents.

The police officer knew him, he knew the woman sitting in the street, I was the only one that new nothing. They acted friendly to one another and to the woman, like something was going to be organised, it seemed.

“I know!” she replied to me. “If you really want to help, why don’t you go and ask at Jimmy’s”

“Do you know Jimmy’s? Just that way, then left” The young man attempted some directions but that was all I needed to know: Jimmy’s!

After all that I felt really silly. -Of course there are people who care!- Actually much more than that: there is a hostel that had provided support for people going through rough times for 25 years. With the help of local communities and various organisations at Jimmy’s there is health and legal support, and a variety of recovery and engaging projects. Through a rehousing program people find their next steps and relocate in more stable situations. Even during the pandemic, Jimmy’s was playing a central role to help people staying safe in Cambridge, with added emergency accommodation.

I have been a volunteer at Jimmy’s since that day. I help out occasionally in the kitchen, cooking and serving food to the guests. I’m getting to know some of the lovely people involved and hear about the different projects in place, and the difficulties of keeping things running throughout these times. Dinner time is often a moment of good spirits. I am sure there is so much I do not see about Jimmy’s endeavour and about the richness and intensities of its stories. One thing that surprised me is being asked by guests why would I voluntarily spend my evenings helping there… it happened a few times! What I do isn’t much, but it makes me feel part of this community, in a city that I still know so little.

I appreciate going around town and recognising faces, exchanging a few words. I rejoice knowing that people who have left Jimmy’s have found a new path off the street. 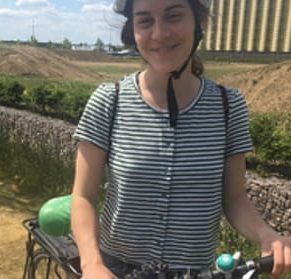